St Patrick’s is renowned for its historical and architectural significance.  In addition it is also home to many cultural and artistic gems as well as being a place of safekeeping for several religious objects of significance.   Our most cherished piece of art is the “Madonna of the Lakes – Triptych Altarpiece”  by Sir John Lavery.

The Prince of Wales and Duchess of Cornwall admired the painting during their visit in 2015.  Lavery had painted the Prince’s great-grandparents, uncle and aunt at Buckingham Palace in 1913.

A highly-acclaimed artist, Lavery was born in North Belfast and baptised in St. Patrick’s.  Although brought up in Scotland, he wished to make a gift to the church of his baptism his first religious work.  The triptych altarpiece was unveiled on Sunday 20 April 1919.  The work depicts St Brigid, St Patrick and the Madonna. Lavery’s models  were the three women in his life:  his daughter, his step-daughter and his wife.

The triptych is viewed each year by thousands of tourists who visit St Patrick’s either individually or as part of organised tours and cruises itineraries.  Details of Lavery’s life can be found by clicking this link.

A more detailed description of the triptych, its origins and history can be read below and can be downloaded or printed by using the toolbar at the bottom of the container. 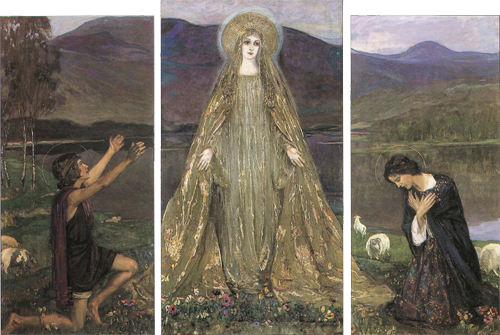 The Madonna of the Lakes – Triptych Altarpiece:  Sir John Lavery 1919.

In addition to Sir John Lavery’s painting, the High Altar is another beautiful feature of St Patrick’s. It was carved in the late 1870s by James Pearse whose statue of St Patrick as Bishop stands over the main doors of the Church. James Pearse was the father of Patrick Pearse, one of the fathers of Irish Independence. The High Altar shows scenes from the Old and New Testaments, includes statues of Our Lady and St Joseph and is adorned with many angels.

The 14 Stations of the Cross are also particularly striking. Made in the High Victorian Age, they are a series of 14 carvings in high relief, beautifully coloured and representing the journey of Jesus from condemnation at the hands of Pontius Pilate to Crucifixion on Good Friday.

Madonna of the Lakes Updated July 2021